The Single Best Strategy to Use for the Best Beaker Bong It almost seems as though bongs are becoming a thing of the past. There are many new contraptions on the market, and they can be used with so many different products, bongs almost seem archaic. Don’t give up on them yet, though. If you take another look at all the options out there, you may be surprised that bongs aren’t the same devices they once were. Nowadays, these devices have some heavy competition.

In recent years, bongs in all shapes and sizes have popped up on the scene, but these devices date back pretty far. In 2015, archaeologists found gold bongs in Russia that was believed to have been used approximately 2400 years ago. The word bong comes from the Thai word “baung,” which means bamboo tube or pipe.

Water pipes are the devices that set the stage for today’s modern bongs. The overall idea of these pipes is to run the smoke over water before inhaling it, which helps cool it down and make it smoother. Many of them were originally made of metal, but today, the most common material for a bong is glass.

What Types of Bongs Are Out There?

There are arguably almost 20 different bongs out there today, but there are only four main categories that these devices fall into.

The most popular types of these devices are beaker bongs, percolator bongs, recycler bongs, and straight-tube bongs.

Percolator bongs feature a small glass percolator that acts as a filter for the water in the pipe. The percolator is in the tube of the bong, or it sits in the base, but many people say it’s easy to use even though it can look rather involved. Percolators can also be purchased later and added to the bong down the road.

Recycler bongs feature two-chamber intake tubes that move the water containing the vapor up through the piece before recycling it through and moving it on to you. It cools the vapor down quite substantially before it ever exits the device, making for a smoother experience.

Straight-tube bongs can be all types of sizes and styles, and some of them come with percolators already attached. These are your basic bongs with a straight tube that goes into a water chamber that travels through the percolator before reaching you.

The last of the main bong types is the beaker bong, which looks exactly like that glass thing you used in high school science class. First and foremost, beaker bongs tend to be a little sturdier than their straight-tube counterparts. That’s because the base of the beaker is flat, giving you fewer opportunities to tip it over. Beaker bongs can also hold more water than straight-tube bongs, so they have more weight keeping them stable. That also makes beaker bongs great options if you want to be able to add an ash catcher since adding one to a straight-tube bong would likely knock it over.

Perhaps the best part about bongs, in general, is that they let you use little product while still achieving a big hit. They use water to filter the smoke through, making it cooler and easier to inhale.

Beakers are already large, so they can fill up with quite a bit of smoke, which helps you get a big hit without too much effort. Even smaller versions of these bongs will hold a substantial amount of water, which helps with filtering the smoke when it comes through the downstem.

Every bong has the same standard parts, including a mouthpiece, chamber, bowl, and a downstem.

The mouthpiece is the opening at the end of the tube. The chamber is where the smoke gathers, the bowl holds the product, and the downstem connects the water in the bong to the bowl.

When you’re ready to use it, remove the downstem and begin pouring water into the bong chamber until you’ve covered all the downstem holes. If your bong has a carb hole, don’t let the water spill over into that opening. You can practice inhaling to make sure you have the right amount of water, but make sure the water bubbles up, but it doesn’t touch your lips.

Place your product in the bowl, and you’re ready to go. But, if you want to find the best way to get the best hit from your beaker bong, there are a few tips you’ll want to follow.

The best way to use your beaker bong is to choose one with a percolator, and if you already have one that doesn’t have that attachment, go out and grab one. This will change the entire experience and will help give you a better idea of why bongs are still pretty great in the first place.

Percolators serve a couple of different purposes. Their main purpose is to force the smoke through the water, which cools it off and makes hits smoother. By passing through the water, the product is getting moisturized, so it’s not dry upon inhaling. Percolators also help filter some of the junk out of your bong as you’re using the device.

To get a big hit from a beaker bong, many people suggest stacking your hits. The way this works is by slowly lighting the bowl and letting the chamber fill with smoke. As you inhale, breathe slowly so that you are controlling the airflow and smoke as it rises through the chamber toward the mouthpiece.

Once the beaker has filled with smoke, pull the bowl out of the bong and inhale what was in the chamber. That’s what the “experts” say is the best way to get the best hit out of a beaker bong.

Just like any other device, every user may have their preferred way of using a beaker bong. Whatever works for you is what you should stick with, so you’re never uncomfortable, and you always have an enjoyable experience. If ripping a strong hit out of the bong isn’t your idea of fun, then that may not be the best way for you.

We let customers speak for us

Love this pipe so much ordered a 2nd one. It smokes smooth and big hits. 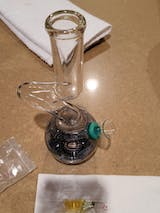 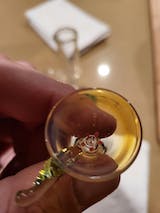 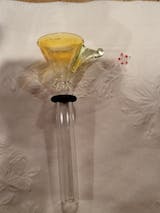 I know there's different sizes and I've got hundreds of these Daisy screens only to have most of them pulverized glass mixed in. I've never bought less than a hundred at a time and I hope these aren't too small or too big being 100 count glass pipe screens is usually about 10 bucks. But to only get 30 I hope they're all intact and most importantly I hope they fit most 14.5 mm male joints and most glass pipes. I'll try to call somebody in the morning but please email me if this is the right order being it only takes two to three business days but you should add an extra day onto that from California to Florida. Just saying I lived in Arizona and it takes an extra day. Just hoping they're all intact and I hope they fit being there going to be a 30 count for the same price as 100 basically. Thank you for your time and understanding, Richard P Matthew Jr

Arrived quickly, before Christmas, and he LOVES is.

Thank you for your review

beginning to like these better than the mesh screens

Thank you for your review