Free US Shipping With All Orders Bongs or water pipes date back all the way to the 16th century, during a time in which they were some of the most common devices used to smoke tobacco. They found their way around the world, developing and adapting to the changing times and changing needs. Fast forward a few thousand years and people are still using these devices today, but one of the biggest differences now is how many different types of bongs are out there on the market.

When they were first created, many bongs were made out of bamboo, which you can still find today, but they are quite a bit rarer than other types. In fact, that’s likely where these devices get their name. Cylinder tubes made from bamboo and used for smoking were referred to as “baung.”

Water pipes and bongs come in dozens of styles, shapes, and materials, including plastic, acrylic, bamboo, ceramic, silicone, and glass. Acrylic and plastic bongs are typically see-through, which allows you to see the water in the bong, so you can keep an eye on its quality. Acrylic, plastic, and silicone bongs also tend to be cheaper than glass or bamboo versions. One major difference between plastic-based materials and glass bongs is the option to add attachments later on down the road. You typically can’t add attachments or make modifications to those less expensive silicone or plastic bongs.

These devices also come in several shapes and sizes, and many of them have additional features that help them operate a little differently than others. When it comes to finding the perfect bong at the right price, all of those little differences come into play. But there is some good news. More variety on the market also means more choices at every price point.

One of the biggest keys to getting a quality piece is finding a quality headshop that you trust. After that, you need to know more specifically which features to look for and which ones to avoid.

What Is a Bong?

Almost all bongs have the same key elements, which are the tube or the base, a downstem, carburetor, a bowl, and a percolator. Not all bongs feature a carburetor or percolator, but we’ll break down what those features mean and how they work in the next section.

A bong is basically built around a centralized chamber that’s filled with water. A tube runs from a pipe bowl to just below the water level. When you inhale through the mouthpiece connected to the pipe bowl, the smoke is pulled through the water, which begins the cooling process.

Depending on the design of the bong, the inhale, drag, amount of smoke, and temperature of the smoke can vary.

Many bongs also feature distinct additions that are designed to change the user experience in one way or another.

For example, some bongs feature something called a carburetor. You can tell if your device has one by simply looking for a small hole somewhere in the middle positioned near the bowl. The carb hole is designed for you to put your finger over it and gently lift it up and down while taking a drag to help control the airflow. The design is intended to help the smoke move upward and eventually be forced out much faster.

Some versions may feature something called a percolator. The term is most commonly associated with coffee makers or, in some cases, Missy Elliot. When dealing with bongs, percolators have a similar purpose to the coffee maker feature, although they work a little differently.

The idea behind a percolator is to continuously cycle through the boiling point or near-boiling point while using the device, whether it’s a coffee maker or a bong.

Percolator bongs come in a variety of designs and can be found on any type of bong, and they come in their own shapes and sizes. The idea is for the percolator to dispel the smoke before it ever goes through the water. That’s what causes the bubbling action in the water.

Honeycomb and showerhead percolators are a couple of the many types of bong percolator you can find. They are shaped like a honeycomb or showerhead, and both feature several open holes that the smoke must pass through before reaching the mouthpiece. The idea is to cool the smoke for a smoother inhale.

All of those additions do make some bongs a little more expensive. As these add-ons become more common, the variety of bongs on the market is getting even wider.

How Many Types of Bongs Are Out There?

It would be impossible to calculate into a specific number, but the bottom-line answer is tons! There are some specific things you’ll want to look for. Each design and type of apparatus comes with its own features, and knowing what features you really need can help keep you on budget.

When it comes to quality and function, one of the key features to look for is size. The first size you want to look at is the size of the base. Bongs with wider bottoms are sturdier and tend to tip over less. When you’re considering price, think small. Smaller devices are usually less expensive, but there are many options of quality pieces that are smaller in size.

There are a few main types of bongs on the market, including the beaker bong, straight-tube bong, and recycler or multi-chamber bong. Each of them has standard features, but they also function a little differently from one another.

These bongs are shaped like beakers and are typically pretty sturdy devices thanks to their wider base. You may also find these tend to produce less backsplash and because of their sturdy design, you don’t have to worry as much about them falling over.

You’ll also find quite a bit more variety in beaker bongs compared to some other designs, and they come in a wide range of sizes. You can find some beaker bongs for under $40, but these can range in price and climb closer to $200.

There are versions of beaker bongs called round-base bongs that function almost exactly the same. Both devices feature a flat bottom, but with a round-base bong, the bottom is not only more rounded but also wider. Round-base beaker bongs also have a sphere-shaped water chamber, and oftentimes, these are referred to as bubble-bottom bongs.

If you’re looking for a classic-style bong you may want to go for a straight-tube bong. These devices are the more old school design you may think of when you picture a bong. It’s also one of the simplest designs on the market.

Straight-tube bongs have one single tube that runs straight toward the mouthpiece, making for a straight line and direct inhale. That’s one key design feature that separates straight-tubes from beaker bongs, which feature bends and turns that the smoke has to move through, which makes you have to work a little harder to inhale.

As far as price goes, straight-tube bongs average between $50 and $100, but if you keep an eye out, you can typically find these for under that $50 price point.

Recycler bongs are also called multi-chamber bongs, and they’re more of an off-shoot version of a straight-tube bong. The main difference between the two is the fact that the multi-chamber bong has more than one tube. In a straight-tube design, there is only one chamber the smoke can flow through. In this version, that straight tube is split into two chambers and connected by a third.

The smoke that moves through it gets filtered more than once, which helps drastically cool off the smoke.

One downside to these types of bongs is their intricacy, which makes cleaning them a little more difficult than other designs.

If you’re looking for a less expensive device, the recycler bong may not be for you. Because of their intricate design and extra parts and pieces, these bongs tend to run a little higher in price than many other versions.

So, How Much Do Bongs Cost?

Bongs can range in price big time. Some of the higher-end versions that include all the bells and whistles can run as high as $500. Although some of them are pretty amazing, they may be out of your price range, but don’t let that scare you away. There are plenty of bongs out there that are much more budget-friendly.

The good news is there are simple ways to find great deals on quality bongs. Many bongs come in under $100, and many others are less than $50 if you can find the right sales.

The fancier, more-expensive bongs are not hard to spot. Typically, the more design and color on the device, the more it will cost. Silicone, acrylic, and plastic bongs will typically run cheaper than glass pieces. With that said, glass pieces, although more expensive typically, do last longer than those other materials, and they can be modified with gadgets and attachments over time.

How to Snag a Deal

When you start shopping for the perfect bong, have in mind exactly how you plan to use it and decide which features are most important to you. Once you’ve narrowed down to the exact type, size, and functionality, you can begin your search. The following criteria can help lead you to a quality, less-expensive device that works for you.

One of your less-expensive bong options will always be a smaller device, but many of these come in pretty awesome designs. You can find a wide array on the market for under $30.

If you’re looking for a durable, easy-to-use bong, you may want to go for a beaker bong. They usually run on the cheaper side, and many are considered pretty long-lasting.

Silicone bongs are growing in popularity, and they are much more affordable across the board than glass pieces. Although they are a little more versatile than glass in that they won’t break and they’re easier to clean, you may find yourself shopping for a new one sooner than you would with glass.

Small and simple is the way to go if you’re looking to cut on cost. The simpler, straight-tube designs and smaller versions will usually go for less.

The age-old method of keeping your eye on your favorite headshop online and watching for sales and markdowns is also important. If you look for those sales online, you can sometimes find amazing deals, such as smaller bongs that go for less than $20.

Also keep in mind that if you don’t want to spring for the more expensive bong now, you can usually find attachment pieces to add to your device later. Those add-ons include ash catchers, bowl screens, percolators, and glass bowl attachments, and they typically run about $20 to $60 each.

If you’re looking for a good deal on a quality bong, you shouldn’t have to look too far. After reading this article, you hopefully have a roadmap for tracking down the right one for you.

Don’t be scared away by glass pieces, and keep in mind that you can always add attachments to glass pieces later. Silicone is always a good and far less expensive option, but you may not get the longevity you’re looking for out of those devices.

If you’re hoping to avoid the more expensive devices, try to avoid the ones with fancier designs and more bells and whistles. But if you’re just starting out or looking for the perfect piece at the perfect price, think small, silicone, and simple. And if you keep your eyes peeled, you might be surprised at how many great deals you can really find.

We let customers speak for us

The pipe is well made and fits easily into a purse or pocket.

Step up to the 14”!! Quality glass, thick and durable. Hits great, shipped fast. Just do it already. 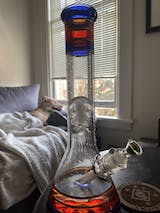 B
Reclaim Catcher 90 Degree 14mm B.
nice and clean

Good quality piece for a fair price. The reclaim catcher is great.